Every morning my two little kitties would come and wake me up bright and early, like clockwork around 6am they would come, pawing my face, poking my nose, and licking. Normally you would find this quite cute and loving, but when it’s on their time and not your own, it starts to take its toll. In 2010 I had had enough! Surely there must be a better way; surely there must be some gadget I could buy to make my life easier while keeping the kitties happy! That’s when I started to research automatic cat feeders!

No longer would I be a slave to my cats and their little tummies. Sadly however, back then there weren’t many options, in fact almost nobody was making them! I ended up buying these two units from eBay that were just made by some random (albeit inventive) guy. They had little towers of food and a motor that would kick out pellets by spinning a little brush; they were also super loud, and the ejecting of the food into the metal bowls sounded like a slot machine that went off 5 times day.

When I look back on it now, they did the job well enough, but they certainly weren’t the nicest or the quietest feeders. The options we have available now are simply incredible; all kinds of companies are making them, and there are way more automatic cat feeders to choose from than ever before. So who is on the top of the automatic cat feeder food chain? Lets take a look! 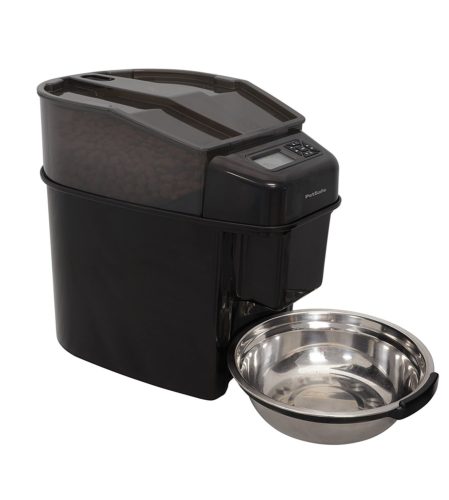 Where were you years ago Mr.PetSafe? I knew this brand from its cat water fountains, but when they got into automatic cat feeders as well I had to check them out, and what I found totally blew me away. The Simply Feeder checks every box you could think of, it is simply the best automatic cat feeder on the market. Programmable, Conveyor system that never gets jammed, a slow feed mode, backup battery power, even a stainless steel bowl is included!

First lets talk programmable. My old automatic cat feeders from years ago used to need to be plugged into a 3rd party timer in the wall that always caused problems. The Simply Feeder has solved this by having the programmable stuff built into the unit itself. So what would you program? Well, you can program when you feed your cat, how much you feed them, and the feeding duration! This is just insane and is perfect for pets that have eating problems. My cat Pixel was on the ‘See Food’ diet, as in if she saw food she ate it! And then as a result I would end up seeing it again soon after.. Yuck! Having a programmable automatic cat feeder meant that I was able to not only control her portions, but also slow the rate of food so that she didn’t just inhale it all instantly. Having a programmable unit also gives you control over your pets diet, by feeding them smaller portions throughout the day your cat will be healthier than ever before. And want to know the greatest benefit? No more kitties in bed at 6am! You can set the unit to automatically feed your kitties any time that you want, 6am, 3am, 12pm; sky is the limit here. You will gain a freedom from insistent cats that you have never known before. 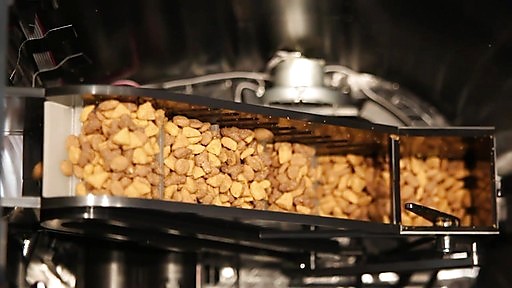 Conveyor belts are cool! All other automatic cat feeders on the market use a either a flapper system or a food dump, but the problem with these systems is that they get stuck all the time! Cat food seems dry enough, but all those tiny bits and food dust get into everything and gum up the works. PetSafe’s Simply Feed saw this coming and came up with an amazing solution. Sort of like a water wheel, inside the Simply Feeder are little buckets which rotate along a ramp, feeding food from the main compartment and into the mouth of the unit. This method of food moving works incredibly well, unlike the old style machines which I had to clean out every week, with the Simply Feed I have never had my unit become gummed up by my cat’s food even once. Knowing that the unit will never get stuck is a godsend if you ever leave for a vacation or long weekend; you can gain the piece of mind knowing everything is fine, and that your pet is being fed on time.

Speaking of feeling better while you are possibly on vacation, the Simply Feeder holds 24 cups of food and can run purely off of battery power. Since I live in Florida, I always worry about the power going out, so this was always a problem with my automatic cat feeders before. While the power was out the feeders didn’t work, which would have been terrible if I were away.

The Simply Feed also dissembles and the majority of parts all are dishwasher safe, so if you ever do need to clean it, its super easy. It also includes a stainless steel bowl that lasts longer than plastic bowls and is better for your cat’s health.

So with all of this praise, what downsides are there with the Simply Feeder?

So is all of this extra cost and effort worth it? Absolutely! Whenever I had to leave the house for a few days, I always needed to find a pet sitter who would come by to take care of the cats. Sure some people were ok with it, but they usually aren’t very excited when you tell them it’s for a week. Or what if it’s just a weekend? Having an automatic cat feeder allows you to almost never have to worry about a pet sitter. Add in a robot vacuum and an automatic litter box and you are nearly totally hands off!

It’s also incredibly important if you have a cat with an eating disorder such as that “See Food” diet. Poor Pixel got pretty fat before we moved to the smaller portions and automatic feedings. There is no better way to put your kitty on a diet than serving controlled portions throughout the day so the kitty doesn’t binge eat.

Finally your mornings and evenings are saved from insistent kitties. When your cat knows that you are not the source of food, they also know not to come and bother you for it. It is amazing the change you see just after the first week; once your cats realize that the machine gives them food instead of you they no longer bother you for food!

If you are after an automatic cat feeder than the PetSafe Simply Feed is the one you are after. There are other options on the market, but none of them have the food conveyor belt system, the company reputation, or the #1 ranking on amazon with 5 stars. The Simply Feeder is simply the best, and I couldn’t live without it.

About the Author: Grant

Grant is a great lover of all things cats and the founder and creator of 'Tag A Cat - The Cat Pictures Sharing App'.

Something is wrong. Response takes too long or there is JS error. Press Ctrl+Shift+J or Cmd+Shift+J on a Mac.